Airborne Ranger was created by Sid Meier, who also founded Microprose the company that published the game. His co-founder was “Wild” Bill Stealey, a retired military pilot. His knowledge of the military played a good part in the creation of this game. It was a different type of game for Microprose nonetheless as the mostly focussed on simulation games and strategy games, many under the guidance of industry legend Sid Meier. Civilisation being the most well known one. 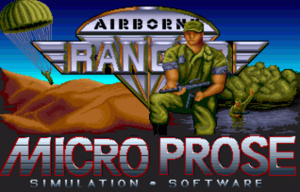 There are many different mission you have to complete in Airborne Ranger, it’s quite a challenging game that has more depth then you’d expect from a game in that era! I’ve had great fun playing this in the 90’s and it still holds well in the rands-of-time. For it’s time it was quite a realistic action game, focussed on a sole U.S. Army Ranger that is send into enemy territory on different missions.

In every mission you play as the said Army Ranger, dropping your spare equipment out of a plane before jumping out yourself. Always starting at the bottom of the map you’ll have to make your way up through enemy territory, dodging minefields, gun turrets and obviously enemy soldiers.

Missions include things like destroying an enemy bunker, killing an enemy officer, rescuing a captured POW (Prisoner of War), taking out a same site or stealing enemy plans. Every map is generated randomly which offers a lot of repeatable gameplay, no mission is ever the same.

Before you go on a mission you’ll get some details of what you should expect along with being able to put items into your spare equipment. As you drop this out of the plan yourself it’s important to drop it in easy to reach locations. Some of the equipment might be crucial to the success of the mission, like hand grenades, bazookas or TNT. Don’t forget about additional ammunition as well as the enemies you’ll face are never ending!

Fun(?) fact, if you are captured (but not killed), you can start an optional rescue mission using another army ranger. Every mission you successfully complete increases your rank, from individual Ranger up to a Colonel.

Play Airborne Ranger below and see until which rank you get!