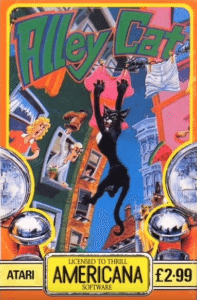 I won’t lie. Alley Cat is one of my all time favorites from the 80’s!

This game has such great gameplay mechanic, randomness and increasing skill level that it’s guaranteed to keep you occupied for a long time.

Alley Cat was created by Bill Williams, after he picked up the development from John Harris, who basically had a one-screen prototype. Bill ended up finishing the game and in 1983 it was released for Atari and in 1984 on MS-DOS by IBM.

You play Freddy the cat, on a quest to his ‘love’ Felicia, who isn’t that easy to reach! Freddy needs to complete mini-games in ever window he enters, that is, if he manages to do so! There’s a continuous flow of ferocious bull dogs waiting to eat him alive!

As the game gets increasingly harder, you’ll notice that the number of ‘big’ trashcans you have (that you need to get on top of that fence!) are getting less and less, until there’s only 1 left. There’s an additional challenge as the smaller one isn’t directly adjacent anymore, so you’ll need to time your runs just right (to evade that pesky bull dog!). 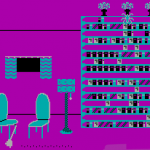 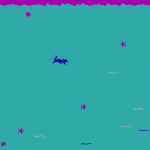 but don’t hit those eels! 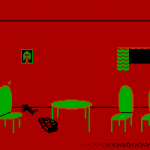 Get that tweety bird!


Once you’ve climbed the fence and enter one of the windows you’re treated by one of the following mini-games (below), with the last one (Go for love) being the ‘final’ level to complete once you’ve done one of the mini-games.

Think you’re up for the challenge? Play Alley Cat below, this is truly a treasured game! 🙂

As always, keep playing and let us help you find back those long lost games!

DO YOU ACCEPT THIS MISSION / Airborne Ranger