Nintendo had a move that was totally unexpected this year, as a true homage to their original console, they are releasing a new version of the classic NES!

The original NES with our beloved plumber Mario (and his brother Luigi) is part of fond childhood memories! Nintendo Entertainment System (NES for short) was released in 1985 on October 18 and produced until 1995. I still recall fanatically playing Mario Bros, moving my controller up in the air with every jump I did (I’m still convinced that this helps you make those tight jumps!) as well as using my blaster to shut down ducks to stop that dog from laughing at me… 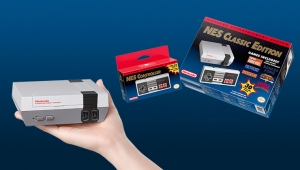 This year we’ll see a new NES Classic edition hit the stores during the holiday shopping season, set to come out in stores on November the 11th of 2016. With a price currently set at $59.99, that’s a steal in my perspective as it comes packed with some of the best classics out there!

With a very similar look to the original NES, it looks identical, you get a much smaller version that and plugs directly into your TV using HDMI. It comes with 1 controller, you’ll obviously have to buy the 2nd controller. Priced at 9.99 for a 2nd Classic Controller that’s still quite do-able; there appears to also be a ‘Pro’ version of the Classic Controller that will be released at the same time. Unfortunately, no additional details are available on that one. We can only hope it’ll be wireless…

What games does this action packed little machine come with you might ask? Well, prepare to spend your Christmas playing:

These are all AWESOME games that can be played for hours and hours on end, I mean all 3 Mario’s? Zelda? Donkey Kong? Bubble & Bobble? Ghost’n Goblins? The list goes on and on but I’m generally excited about _EVERY SINGLE GAME_ 🙂

Nintendo had this to say about it:

“The Nintendo Entertainment System: NES Classic Edition is ideal for anyone who remembers playing the NES, or who wants to pass on those nostalgic memories to the next generation of gamers.”