One of the best arcade hall games of the 80’s, the Teenage Mutant Ninja Turtles Arcade game. Playing this with up to 4 people at an arcade machine was such a cool experience!

Ah yes.. Arcade halls, what an experience that was! Filled with arcade machines, each having different type of controls, from full bikes you ride, to guns that needed slinging or simply joysticks to play. Coins would burn through your pocket in no time!

You play as one of the 4 turtles

In this game you have to save April (a befriended reporter), from the evil clutches of Shredder (Oroku Saki) evil samurai that’s the archenemy of master Splinter. Splinter was the pet rat of Hamato Yoshi, who was murdered by Shredder to revenge his brother’s death (Oroku Nagi). 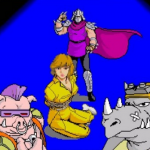 The turtles and master Splinter have become ‘mutated’ due to radioactive ooze that fell from a truck into the sewer. Splinter names the turtles (after a book on Renaissance artists that he found in a storm drain) and trained them in the arts of ninjutsu, so that they should take revenge for Splinter’s dead master, while still raising them as his own sons.

At one point also master Splinter has to be saved from Shredder and his Foot Clan army. Shredder has 2 helpers as well, not always the smartest ones, called Bebop and Rocksteady. You’ll regularly face them in this game!

The Teenage Mutant Ninja Turtles arcade game takes you through the streets of New York and of course the oh-so familiar sewers where the Turtles and their master Splinter live.